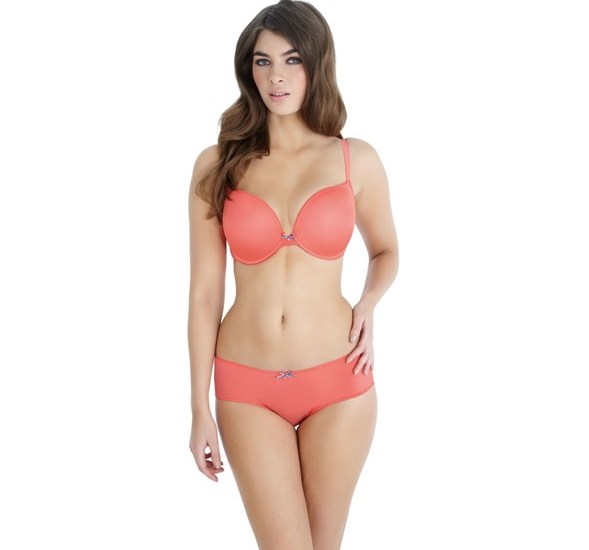 Yes, readers, I know…. you have been searching my blog for a review of the Cleo Neve, which replaces the Cleo Jude.

I had the opportunity to try a Neve last week, and here’s my opinion: Neve is no Jude.

The Neve is a lovely bra which addresses some of the shape issues fitters and customers have been complaining about in the Cleo Jude – the feeling that your boobs are standing out at 90 degree angles on the outer edges of your chest and various other anomalies…unfortunately, those funky little fit issues were the exact reasons the Jude worked for me (and the Cleo Neve doesn’t).

Here’s my attempt to break down the differences.

First, I think Cleo did the right thing by removing the contrasting lace trim on the Neve. I could see the contrasting trim color through some tops when I wore my Cleo Jude.

Second, there are size differences if you’re trying to convert from your Jude size to your Neve size. I tried a Cleo Neve in 36G (I’m usually a 38 band in Cleo), with an extender. My new “best” cup size in Cleo is 38FF/G. The Jude that I own is a 38E, which is admittedly too small for me now – I would need a 38F/FF in the Jude. The Neve was much too small in band and cup, even with the extender. I should have been able to wear the Neve in a 36G, with an extender, if the style fit my shape. I think I would have needed a 38GG in the Neve.

Third, there were several key shape differences between the styles. The first thing I thought once I put Neve on was “designed by Parfait” – super soft fabric, comfortable, and shallow. The cups are rounder and taller at top, and the wires are deeper and cups are shallower on the bottom. The Neve completely does away with Jude’s shape, which was compatible with my lower-full breasts.

In the graphic below, I overlaid the Cleo Neve over the Jude. You can see the slight upper cup shape difference and see the wrinkling in the bottom of the cups where the cups are shallower compared to the Jude.

For those of you hoping for a shallower, more up-and-center moulded t-shirt offering from Cleo…well, Neve may be your girl. If you were a Jude fan because she was a great moulded t-shirt bra for lower-full breasts, well, you may be disappointed and on the hunt for a new t-shirt bra.

Have you tried the Cleo Neve? Were you a Jude fan and now happy with the Neve?