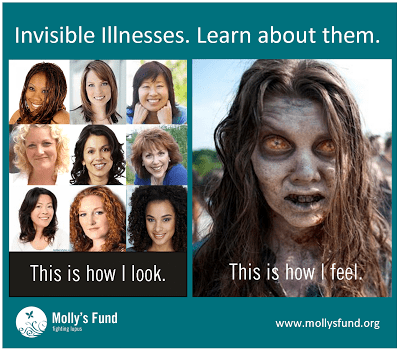 Autoimmune diseases are generally classified under “invisible diseases”…we’ve all seen the memes.

But for the last few weeks, my diseases have felt anything but invisible.

During my layover at DFW a bartender at Papadeaux started quizzing me about what I could eat…turns out he’s afraid he has Celiac Disease (runs in his family), and wanted my opinion (apparently any opinion other than his mother’s) on symptoms and testing. By the way, Papadeaux has a gluten free menu and I’ve always had great experiences there. Chow down, fellow gluten intolerants.

A family friend immediately started quizzing me about Celiac Disease because she suspects her grandson “has it”…and that conversation morphed into Celiac testing hints, and then on to thyroid disease symptoms and testing for herself and her daughter. I sent her home with a pile of Celiac and thyroid disease handouts. I hope they help.

It seems everywhere I go, my diseases are in the spotlight. And the only explanation I can come up with (because I’m past the point of wanting to turn my health issues into smalltalk) is that people are searching for answers to their health problems, and if you look at them and listen to them…drop your preconceptions, you can usually detect physical symptoms of the disease they are inquiring about.

So, how are these diseases invisible? The answer is they are not.

The lady with thinning hair next to you on the bus…she has a symptom of thyroid disease. The guy in the cubicle next to you with the chronic headaches…he could be exhibiting a symptom of Celiac Disease.  The woman walking slowly and deliberately through the clothing store, asking the salesperson to put her one shirt in the dressing room so she doesn’t hurt her hands by carrying it as she shops…fibromyalgia.

Our diseases are not invisible. Every day we wish they felt invisible, but they don’t. And if you bother to look, if all of us bother to look around us and see each other, I think these diseases would be immediately visible.

So why am I writing, again, about Autoimmune Disease on a lingerie blog? Because it occurred to me (again) that when you don’t feel well, the last thing you worry about is how attractive your underwear is. But you immediately want your underthings to be comfortable, and if they aren’t…well, off they go to be replaced by something more serviceable.

I have the luxury of addressing this topic from the perspective of an Autoimmune patient who is “doing well”. But I’ve been the patient in chronic pain (we rarely get diagnosed without it). I remember wondering, during the worst of it, how I had allowed my physical appearance to deteriorate, how those ugly and ill-fitting clothes arrived in my closet and found their way onto my body. How I had decided to settle for…well, less from and for my physical and mental self. I remember wanting just to feel pretty again, and believing it would never happen.  While it may be materialistic and superficial, I view my ability to locate and purchase a well fitting piece of lingerie or clothing as a personal victory. Marks of progress, so to speak.

So, no, disease isn’t invisible. We wear it on the outside, too. Just look.