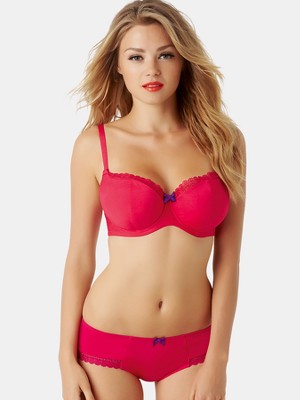 I’ve been hanging on to this review for a few weeks, because I’ve been wearing the Juna and interpreting the fit.

After much consideration, observation, and general juggling of my breasts I arrived at the conclusion I need vertical seams because they are a version of “shallow” breasts (more on that in another post). The Juna was mentioned in a Venusian Glow post about shallow breasts, and I was excited to hear others with my fit issues have had luck with her and she’s still in production as part of Cleo’s Everyday Essentials Collection.

The band sides looked low-ish, the lack of triangle balcony styling appeared promising, she comes in nude, and her sister sizes were available at HerRoom.com. Fit notes on HerRoom said the band ran large or stretchy; so with high hopes I ordered a 34GG, 36FF, and 36G.

Band: Fits my 35 3/4″-36″ under bust quite comfortably. The material is very soft and the band and straps are stretchy; however, I found I still preferred the 36 band over the 34. The 34 felt too tight and I noticed some distortion. If you sometimes go down in band size, I would consider trying the smaller size. Despite the stretch, it is very supportive.

Gore: The gore is what I would call “tacktastic” and is quite firm and supportive and has snap to it. Where the lace attaches to the gore, there are two hard spots that can rub your breasts if you are close-set, as I am. I only feel the rub when slouching to the side or laying down. The effect has lessened after 3 washes.

Wires: The wires were wide enough to allow my breasts to  instantly settle into the bottoms of the cups. Unfortunately, after wearing the Juna for a month I’ve decided the wires are simply too tall, and poke me in the armpits. The wires also dig into the bony areas on my band line, under my armpits.

Cups: The cups are deep enough at the bottom to allow my lower-full breasts to settle into the bottom of the cups. I tried on the 36FF and had just a touch of quadraboob so I moved up to the 36G. The 36G is a very good fit but I do get some gaping at the cups while sitting in certain positions and during some parts of my cycle.

After a month: There has been a good bit of stretch in the band and straps; and some stretch in the cups, but I’m not sure if an FF would stretch enough to escape quadraboob.  After a month of wear I notice a tiny bit of collapse at the bottom of the cups; however, it only occurs after wearing the Juna 3-4 times between washes. I went to the middle hooks after a week of wear, but the stretch seems to have stabilized.

Conclusion: My instinct to try a vertically seamed cup for lift from the bottom was correct – the Juna cups definitely fit me better than any other bra I’ve tried. The bra, despite all of the negatives above, is a good fit. It gives me a rounded, uplifted, centered look. I can wear the Juna, but not two days in a row. The sturdy wires perform as needed,  given the construction of the bra; however, the gore and underarm heights are uncomfortable for my short-waisted, close-set build. The wide strap position and high underarm cut (strap meets cup meets band) are not well suited for my prominent pectorals and underarm fat, and the bra irritates those areas by the end of the day.

If you are short waisted and your breasts do not touch, this bra could work for you. It does have wide enough wires to allow my breasts to settle down into the cups, and by clipping the wires 1/4″ I can wear the bra. Generally, a 4″ side seam is in my range of tolerance; however, the Juna has strong wires. The combination of my touching breasts and short-waisted/high set breasts, and width (which pushes the wide straps out even wider) come together uncomfortably in this bra for me.

The Juna addresses three of my fit points – vertically seamed construction, less upper coverage, and the band/wire does not irritate my rib injury (however the wires do irritate the sides of my ribs).