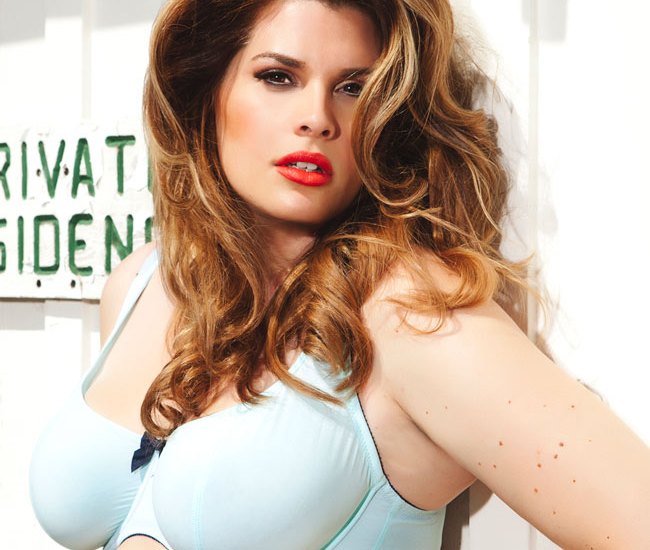 In a recent HerRoom order, I tried three 38G Claudette bras: Sophia Minx, En Dentelle, and Cool Cotton . Unfortunately did not find a good fit with those three, mostly because I ordered the wrong size.  Of the three styles I tried, the Sophia was the best fit, despite the cups being two sizes too large.

I got lucky yesterday, and found the Dessous Mesh Full Coverage 2000 at Alice Rae Lingerie….and discovered my best Claudette fit is a 38F. Incidentally, the Dessous fits me like a dream….but more on that in another post.

The Sophia was offered in three colors on HerRoom, and I chose the sea foam/navy combo pictured above. It was a very pretty bra, and extremely comfortable. So, wrong size considered, here’s a quickie about the Sophia Minx – which was actually a good fit despite the wrong size.

Band: Very comfortable. I would not have sized down to a 36.

Gore: A repeat of the En Dentelle: too tall and would not tack.

Wires: Crescent shaped and comfortable. Claudette wires are more comparable to Freya than Fantasie in flexibility. The Sophia did not have the widest Claudette wires of the three styles I tried.

Cups: I had wrinkling above the wire and throughout the cup; however, that was too be expected given the cups were two sizes too large. I also had decent support and shape from the vertical seams. The lift directed my breasts straight up, allowing for a bit of spread to the outer edges. The cups to not push to the center. Despite the thin material, I felt like I had plenty of coverage and shape.

Straps: The straps, despite being 11″ apart, were a good fit. They were also very comfortable, wide, and supportive.

Conclusion: If I had ordered the Sophia in my correct size, I’d probably be wearing it right now. The gore was too tall in the 38G; however, if the Sophia style changes  like the Dessous, the F cup would have a lower gore that would have probably allowed the bra to work. I would recommend the Sophia for high-set breasts, and in the lower size ranges it may work for close-set breasts.

Wire: Squishy (like a Freya demi). Stretches bottom and top of wire. Inner wire (by gore) stays fixed so wire stays very round at gore.