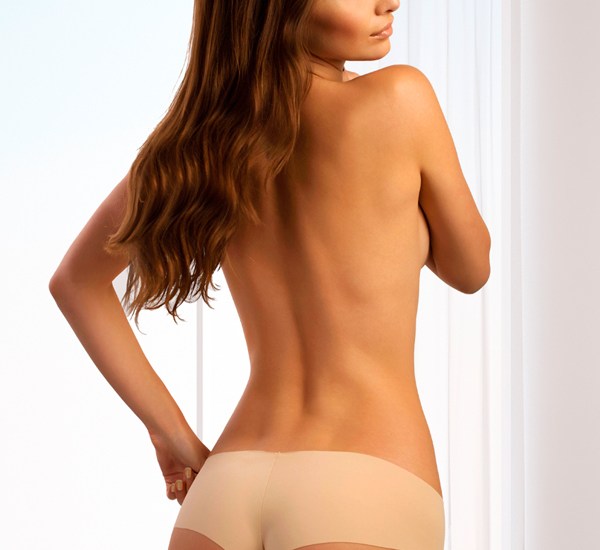 Nudwear contacted me last month and asked if I’d like to review one of their bottoms. Since I am underwear-challenged, I was excited to try something new, especially since the Nudwear boyshorts design is a bit outside my normal style selection.

The first thing I noticed was that the Nudwear boyshort microfiber fabric is very soft, and the sides are seamless. These are two positives for me since I struggle with stiff or scratchy fabrics and seams over my hips. Unfortunately, I also noticed the jagged, laser cut fabric along the waist and legs, as well as two large cuts in the fabric where the gusset begins. Upon further inspection, I also found a hole which appears to be the result of an unraveling overlock stitch, where the microfiber meets the cotton gusset.

These images illustrate how the laser cut boyshort edges should look, according to the manufacturer’s website.

Despite these quality issues, I was determined to try the Nudwear boyshorts, so I hand washed them and let them hang dry. I noticed no difference between the unwashed and washed boyshort – the laser edges did not appear to fray and the hole near the gusset did not unravel further.

I decided to try the “no panty line” boyshorts with one of my most unforgiving pieces of clothing – my thin jersey skirt. Jersey skirts are supremely comfortable, but I battle vpl every time I wear them, and I was looking forward to not seeing a panty line for once!

As advertised, the Nudwear boyshort was invisible under my skirt. I admit to being a bit dubious about the low rider fit of the boyshort – I am a high cut leg/high waisted panty kind of girl because of my long rise and long high hip, and the Nudwear boyshorts are very low cut. I remarked, as I was heading out the door, that I hoped they didn’t fall down. My husband laughed and reassured me they weren’t going anywhere.

Well, he was wrong.

About three quarters of the way through my grocery shopping, somewhere between the eggs and a quick backtrack to the produce section, I could tell the boyshorts had worked their way down my hips to a dangerous location under my butt cheeks and around my upper thighs. I indiscreetly hid behind a pallet of lettuce and gave them a good tug from the sides – and I was very surprised, as I pulled up, to discover how low they had dropped. Once I left my lettuce sanctuary I had to give them another tug around the apple display to convert them into a makeshift thong – and then I applied some major Pilates squeeze-the-cheeks action to ensure they didn’t slip down again during checkout.

At this point, I started to wonder if I was wearing the boy shorts incorrectly. So, when I arrived home I checked my fit against the images on the Nudwear site to ensure I was wearing the boyshorts properly (I was). I wore them for the duration of the day, readjusting to keep them up. I ended up with the sides in rolls – yanked up as far as I could get them; and the back up my crack, thong-style.

At the end of the day I wondered if I was wearing the wrong size in the Nudwear boyshorts, so I double-checked the size chart against my measurements. I am currently a 46″ low hip (where the boyshorts want to sit), 43″ high hip, 37″ waist above my high hip, and 34 1/2″ at my true waist (which is under my bra band, basically). I wear a size 14 U.S. pant, and usually an XL bottom. It is possible that the panty-falling-down issue I experienced was because I was wearing a L/XL boyshort and need a M/L boyshort; however, I’ve worn too-large and too-small panties before and I’ve never had them almost fall down. I honestly think the fit of the Nudwear boyshort and my long-rise, high-hip body shape are incompatible.

Ultimately, the Nudwear boyshort was not a great fit; however, the experience did convert me to a member of the laser-cut fan club. I would like to try Nudwear in a more full-coverage style, after some of their quality control issues are resolved. If you are a fan of low-cut boyshort styles and are price sensitive, the Nudwear boyshort may be a good option. The boyshort retails for $14 USD on the Nudwear site, compared to other name brand laser cut thongs/shorts around $25 USD.

The Nudwear Seamless Boyshort was provided for review from Nudwear. The opinions are my own.

Other Nudwear reviews in the blogosphere: