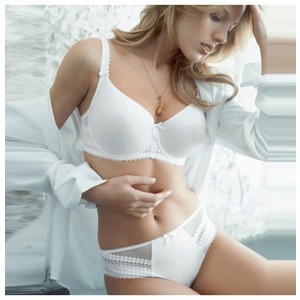 I have tried the Rebecca in a 36FF and 36F (with a band extender – more on that later). The Rebecca is a spacer foam fabric moulded cup bra. If you haven’t tried a spacer fabric bra, I recommend you do.  I have seen the fabric recommended because it is cool and comfortable, but for me, the winning feature is that it’s a great smooth cup option for those of us who struggle with traditional rigid smooth cups like Freya Deco or Panache Porcelain.

Band: Compared to the Cleo Juna and Freya Deco, the band is not as stretchy. That said, the 38 band positioned the cups too widely for me. The band also will “release” after about 3 washings and suddenly feel 1″ larger – and then shrink up again after a wash.  After about 6 washings it permanently releases by 1″. I finally added a band extender to the 36F – and it feels much better. Remember, I don’t have a fleshy rib cage (despite it being 36″). Eventually, I’ll be able to remove the extender.

Gore: Between the 36F and 36FF the gore grows by 1/2″. That may not be a big deal to most, but it is to me since I need short gores. The gore does not fully tack on my close-set, wide frame; however, the 36F is an improved fit over the 36FF.

Wires: The wires are wide enough on the outer edges without stabbing my underarms. Towards the center; however, the wires are too narriw (or curve up too quickly), and sit on breast tissue just a bit. The wires are not deep U shapes, and have more of a rounded outer section wing to them.

Cups: Spacer foam fabric can stretch. Alot. I originally purchased an FF cup (my usual Fantasie size) but found the fabric stretches too much throughout the day to give good support. Sizing down a cup size gives the support you need. It also greatly reduced the footprint of the cup – there is much less fabric on the F cup than FF. Dramatically less…. Also, downsizing helped center the cups (where it meets the band) more on my chest and moved them out from under my arms, which felt much better. There are side slings for support, however, I don’t even notice them. I won’t say they don’t work…but they aren’t strong enough to stop a bit of outward projection at the base.

After a month: I can’t write about how the Rebecca feels after a month without taking into consideration why I went down a cup size and use a band extender. The spacer fabric stretches, so after a month a too-large cup becomes painfully obvious – hence, moving from a 36FF to a 36F. The tall gore on the 36FF also began to poke out (probably because the cups were too large). This does not happen in the 36F. Lengthening the band with the extender helped because I got a more centered (remember I’m close-set) fit and a longer band. The extender lengthened the band, and didn’t widen the position of the cups. The bra is very well constructed, and the fabric washes well. The band will break in after about 6 washes.

Conclusion: Would I recommend the Rebecca? Yes. But beware it is more full-coverage at FF cup+. I would especially recommend it if you have bad luck finding smooth cup bras because moulded or contoured cups don’t fit the shape of your breasts. Personally, I feel like a mermaid in a shell bra in a Freya Deco or Panache Porcelain. The Rebecca gives a very different fit, and decent uplift. I do admit I’d be happier if there were vertical darts in the lower 1/3 of the cup – they probably wouldn’t be visible even in tight t-shirts. I am very wide, and I do have a bit of outward spread; however, I’ve had worse in seamed bras.

A Sophisticated Pair did a great post about upcoming Fantasie styles, and I noticed the Rebecca is coming out in a “less coverage” version – the Rebecca Nouveau. I’ll definitely try it. Ironically, the Elomi Hermione looks to have a shorter gore and perhaps a shorter band…and it’s made from the same spacer foam fabric. Fussy Busty has a great review of the Hermione. You may give it a try if the Rebecca peaks your interest.

Distance from strap to strap: 8″